Sorry for the light posting lately. Long list of excuses (budget talk, budget meetings, etc.), but the bottom line is that I'll be back at it strong next week.

In the meantime, here are some interesting links:

Posted by Chris Cooper at 9:15 AM No comments: Links to this post

Did the Confederate Flag Matter in 2008?

Did the Confederate Flag Matter in 2008?  Some experimental research suggests that it may have.  A team of researchers from Florida State University found that when people were primed with a Confederate Flag, they were less likely to say they would vote for Barack Obama than those who were primed with a neutral symbol.  Further, those who were forced to view the flag were more likely to hold "anti-black sentiments among whites, regardless of their stated beliefs on racial issues."

This seems to me to be a very important study and one that should be getting more media attention.   Other than the Miller-McCune article I liked to above, I can't find anyone else covering it.  Especially during the anniversary of the Civil War, this seems like a newsworthy and relevant article.  And, it sure raises a bunch of questions about the placement of the Confederate Flag on the SC State House grounds (for a great picture of the flag in SC, click  here).
Posted by Chris Cooper at 4:35 PM No comments: Links to this post

Heath Shuler, the Wild (Mid)West and Opinions on Gun Control

Following fears from the Arizona shooting, Heath Shuler now says he plans to carry a gun into public events.  This inspired me to look into public opinion on gun control--who supports it, who doesn't.  Evidently the folks at the Pew Center for the People and the Press had the same idea and fortunately, they've got a nice breakdown of what their data find.  They asked people whether they believe it is more important to control gun ownership or to protect the right of Americans to own guns.  Keep in mind that these data were collected in September, 2010--before the AZ shootings.  Data collected after the tragedy might shift opinion a bit.

The first lesson is that more Americans support protecting the rights of Americans to own guns than they did in the early 1990s. 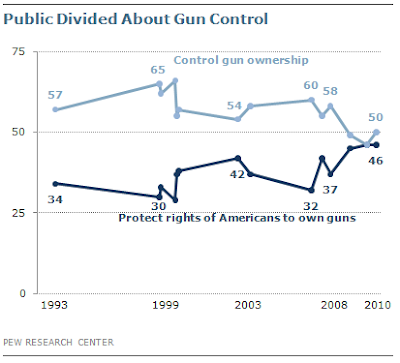 So how does this vary?  Here are a few unsurprising stats:
Here are some surprising ones (at least to me):

Posted by Chris Cooper at 3:43 PM No comments: Links to this post

Posted by Chris Cooper at 12:45 PM No comments: Links to this post

From time to time, I'd plan to feature a few relatively recent books that are influencing my thinking about politics and that I can recommend.  And don't worry, I'll focus on books aimed at a popular audience, not ones aimed at pointy-headed intellectuals.  Here's a few recent ones that I've been digging: 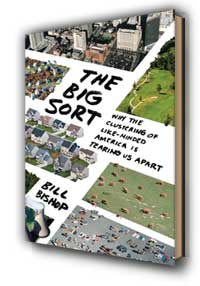 There have been a few good books lately about place and politics, but this is my favorite.  Bill Biship, an Austin journalist and Robert Cushing, a retired professor teamed up on this book that argues that what is tearing us apart as a nation is mobility and geography.  While we used to live around lots of different types of people, we now can and do choose to live among people who are just like us.  These changes, according to Biship are most obvious and vexing at the local level.  When we're surrounded by folks like us, it's awful hard to have meaningful political dialogue.  There's a lot of political science literature that supports Biship's findings (and to his credit, Biship cites a good bit of it), but Biship's presentation of the evidence is a lot more accessible for non-academics.   Although he frequently uses Austin, Texas as his example, you could just as easily substitute Asheville, Durham, or Charlotte.

There's a lot to like about this book--it's well-written, data-based, has important political consequences, and holds Democrats and Republicans responsible.  Indeed, Biship doesn't just lay the blame on the doorstep of those who live in the suburbs and surround themselves with  other white Republicans, but also at young liberals who are equally as closed-minded towards Republicans as they claim the Republicans are to them. Given the debates over redistricting that are about to start, this is a great time to read this book. 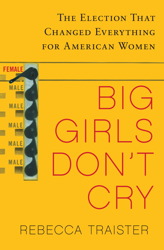 If there are a few good books about place and politics, there are ten times as many about the 2008 election.  This one, however is a little different.  Rebecca Traister reflects on what the 2008 election meant for feminism and women's issues.   Traister's a Democrat and she makes that very clear, but her handling of what the Obama/Clinton primary meant for the Democratic Party is masterful and changed the way I think about women in politics.   Unfortunately Traister doesn't consult any empirical evidence from political science (which is a shame since Political Scientists know quite a bit about these issues), but her first-person account of the election is well-written and taught me a great deal about what this election meant for many women at a personal level. Reading this book also led me to reflect on Bev Perdue's run for Governor and the rhetoric surrounding the election. 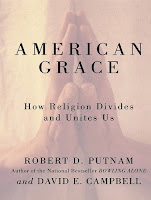 Robert Putnam is a Political Scientist at Harvard who writes big books with lots of data.  He's also one of the race academics whose ideas effect how real people think about politics.  His last book, Bowling Alone is easily one of the most important political books of the last 25 years. Sure it's controversial (see, in particularly this careful critique), but it's one of those books that every educated person should read.  Amazing Grace is likely to be just as important.  Putnam (this time with co-author David Campbell--a Political Scientist at Notre Dame) writes about the role of religion in American public life.  Religious people will like some of it and hate other parts of it.  As will agnostics and athiests.  All educated people, however, should read it and deal with it somehow.  Particularly in a state like NC where religion is a major, major player, this book should be required reading.
Posted by Chris Cooper at 6:30 AM No comments: Links to this post

There's been a lot of talk on this blog and elsewhere about shifting party loyalties in North Carolina--particularly in the 2008 election.  Probably the best article on the subject is by UGAs Trey Hood and South Florida's Seth McKee.  Hood and McKee find that NC went for Obama not because of shifting partisan loyalties of long-time residents, but rather because of the influence of newcomers.  In a very readable article that draws from multiple data sources, Hood and McKee document the large number of in-migrants to the state and find that these in-migrants are more likely to be partisan independents, but also were more likely to support Obama. These are the folks that shifted the Tar Heel state towards Obama.  Given evidence that Raleigh is the fastest growing metro area in America, I'm guessing Hood and McKee's findings may be influencing NC politics for years to come. Who says academics don't write on stuff that matters?
Posted by Chris Cooper at 6:12 PM No comments: Links to this post

Sorry for the light posting as of late--beginning of the semester and all that.

A few cool links, however:

Posted by Chris Cooper at 2:53 PM No comments: Links to this post